This article originally appeared on: The Undefeated

It was 1967. Earl “The Pearl” Monroe had just graduated from Winston-Salem State College, a historically black college in North Carolina. He was chosen as the second overall pick in the ’67 NBA draft to the Baltimore Bullets (now the Washington Wizards). Monroe was known as a playground legend from the streets of Philadelphia, where he developed smooth skills that set him up to be nicknamed “Black Jesus.”

In 1971, he was traded to the New York Knicks, where he spent the next nine years making up the Knicks’ backcourt with Walt “Clyde” Frazier. The two were surrounded by a star-studded team that made it the NBA Finals in 1972 and 1973 consisting of Willis Reed, Bill Bradley, Dave DeBusschere and Phil Jackson. In 1973, the Knicks with Monroe won the franchise’s second NBA championship in four years, beating the Lakers.

He was known as the king of the “shake and bake.” His smooth moves landed him in the Naismith Memorial Basketball Hall of Fame in 1990. In 1998, he was reintroduced to a new generation of basketball fans via Spike Lee’s film He Got Game, starring Denzel Washington and young NBA star Ray Allen. Jake Shuttlesworth (Washington) explained to his son, star basketball prospect Jesus Shuttlesworth (Allen), how he got his name Jesus.

“My all-time favorite ballplayer was Earl Monroe. Earl the Pearl. Yeah, he was nice. See, everybody remembers him from the Knicks. You know, when he helped win that second championship. I’m talking about when he was with the Bullets … and down at Winston-Salem State … 40 points a game the whole season. The whole season. But the Knicks, they put the shackles on him, man, you know, on his whole game. They locked him up, like in a straitjacket or something. When he was in the streets of Philly, the playgrounds, you know what they called him? Jesus. That’s what they called him — Jesus. ‘Cause he was the truth. Then the white media got ahold of it. Then they got to call him Black Jesus. He can’t just be Jesus? He got to be Black Jesus. You know, but still … he was the truth. So that’s the real reason why you got your name. Not Jesus of the Bible, Jesus of North Philadelphia. Jesus of the playgrounds. That’s the truth, son.”

In 2015, Monroe found himself at the National Civil Rights Museum in Memphis, Tennessee, in the same room, on the same balcony where Martin Luther King Jr. was killed. He attended Winston-Salem State during the height of the civil rights movement, then entered the NBA, where he faced racism. Yet, he managed to overcome that adversity to become one of the greatest faces of professional basketball.

“I used to read speeches of his before my games with the [Baltimore] Bullets,” Monroe said during an MLK Day symposium. “That would kind of get me fired up. Not only just his words but how he spoke his words, how they rolled off his lips and what it made me feel like inside. He gave me a sense of warmth, gave me a sense of wanting to do something that was maybe not even in my own essence to be able to do.”

Monroe was one of three recipients, along with Jason Collins and ESPN’s Chauncey Billups, of the 10th Annual Sports Legacy Award as part of the Memphis Grizzlies MLK Day honors.

Monroe was a four-time NBA All-Star, and is considered one of the top five greatest Knicks players of all time. The 6-3 guard averaged 18.8 points, 3.9 assists and 3.0 rebounds over his 13 seasons with the Bullets and the Knicks. But before his NBA career, he was earning a degree in elementary education, with a minor in English, as a student-athlete at a historically black college or university (HBCU). He was a stylish guy who wore applejack caps and was a “Groove Fellowman.” He tells his HBCU memories here.

I was in school from 1963 to 1967. I really hadn’t planned on going to college, and someone asked me if I wanted to go to Winston-Salem. I had never really heard of Winston-Salem before. The first time they asked me, I told them no. About six months went by, and they asked me again if I wanted to go to Winston-Salem. I said, ‘If my friend will go with me.’ They said, ‘We’ll see if we can get him to go.’ They came back to me and said, ‘We could arrange for him to go down there as well.’ That’s how I wound up at Winston-Salem State University. When I got to Winston-Salem, we weren’t really on scholarships per se. We went down, and we were there with the football team. We went down early in August. We got there.

This is the first time I had been South, so I didn’t know how to really engage it, because of all the stuff I had seen on the news with the civil rights movement and the dogs, the water hoses and things like that. I was a little apprehensive, but we stayed with the football team in the basement of the gym the first week that I was there. What they did was basically we almost had to try out for the [basketball] team. While we were there, we got accustomed to the way things were down South, and then we also had to make the team. We practiced with some other guys that were there, and I guess the coach saw enough in me to say, ‘We can keep you.’ My first semester, we actually paid to go to school, and we had what they call a working scholarship, which meant that we had to clean half the gym every day. That was my first introduction into school.

However, the greatest thing that we found when we got there was that Winston-Salem was not your typical Southern town, so to speak. It was an interesting type of town. They had Arcade Rentals there. They had Western Electric and a lot of industry around. A lot of the blacks that were there seemed to be pretty well off as opposed to where I was in Philadelphia. When the high school football teams played, you’d go down to the football field, and it’d look like a new car lot, because every kid that made the high school football team had a new car. That was a little unusual for me. But after a while we got used to the fact that Winston Salem was kind of a progressive town. It had its own cab service, it had its own bus service. Blacks that is. It made it easy to settle in coming from the North.

Racism was as rampant, I mean you could cut it with a knife, but within that time you knew pretty much where you should go, where you shouldn’t go. I remember one time that my family came down to visit me, and my friend’s father came down and we went out to a place to eat. It was a diner, and we walked in there and the people said that ‘They didn’t serve our kind.’ It was the first time that I had been confronted with that type of scenario, and I was kind of a hothead at the time. He had to almost drag me out. They actually picked me up to take me out of the place. That was someplace that we weren’t supposed to be, and a lot of times when, like in Philadelphia which is where I was from, you just go places. It didn’t really matter where it was, but with this particular incident I learned where to go, where not to and life was very tranquil after that. That was likely THE worst incident that I had. I had a great experience down there. Of course, there were times and whatnot that you were doing just stupid things that the college kid does, but for the most part as I look back at the experience that I had there, it’s the reason why I’m here today. One of the reasons at least, God is the other.

We had vespers every Sunday, so you had to have a suit. A lot of people back in those days didn’t have a lot of clothes. I didn’t like dungarees, anything like that, or jeans. I wore slacks and shirts and things of that nature — slacks and sweaters. There was a thing in Philadelphia that was called ‘yock.’ That was a style, it’s Y-O-C-K, and there were guys that wore that. Pants would go high, kind of like brogan shoes, slick-type of applejack caps. That was kind of the dress.

It’s interesting that I look now and see the guys today are wearing the same basic style. It’s interesting to see how the styles have come back. Of course, the suits were like sharkskin suits, as we called them. I pledged to a social fellowship and that was the Groove Phi Groove Social Fellowship. Our sisters were Swing Phi Swing. It was established back in 1962 at Morgan State University, and we just celebrated our 50th anniversary not too long ago.

I have two best college memories. One was winning the national championship in Evansville, Indiana. That was the college division championship. Interestingly enough, I’m going there later this month because I’m being inducted into the Small College Basketball Hall of Fame. It’s like coming full circle. Secondly, or it could be first, is the fact that I graduated. Walking across the stage to get my diploma and throwing my hat out into the gym when we got in, marching into the gym. That was very exhilarating for me. I say mostly, because you know I graduated on time. That was important for me.

Winston-Salem was a teachers college. We had 16 women for every man there, you know so it was a great college to go to. It taught me the importance of friendship. It taught me the importance of being myself, being a real man. My college coach “Big House” Gaines was, I guess, responsible for that because everything he said was a metaphor for things we should know. One of the things I live by is something he said to us is that every door is locked, and you have to be the one to be able to break that lock. And nobody’s going to do that but you. His whole phrase is, ‘Opportunity at every door doth knock, but it’s never been known to break a lock.’

We go for [homecoming] every year. We try to, at least, anyway. I think it’s important, as you get older, you see the importance of having gone to school together and the camaraderie that you form. It’s been so long that I’ve been in school, but I’m still with the same guys I was with in school. It just gives you a sense of pride and brotherhood. I don’t think I would change anything about going to school. It was important for me. We’ve had some great people go through the school. ESPN’s Stephen A. Smith went there. I think the fact of what Winston-Salem was, in large part, was responsible for so many people and their successes in whatever they did. 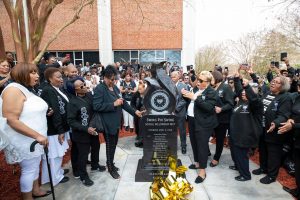 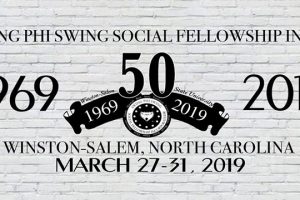 Virginia Tech celebrated many important milestones at the Black Alumni[...]